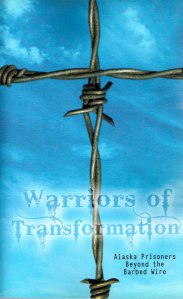 “The black raven in Yup’ik legends is a god-like creature that can transform itself into other objects or forms to trick other animals and human beings for its own selfish amusement — and Trickster seemed to follow me wherever I went. He shifted into alluring shapes that drew me to the edge of destruction. Sometimes my Trickster looked like alcohol. Sometimes he was an uncontrollable sexual craving. But always this spiritual Trickster wanted to devour my soul.”

“Trickster’s Roost” tells the story of Yup’ik Eskimo, Timothy, arrested 45 times, and serving a total of 15 years for his crimes. An alcoholic, a child abuser, and homeless on the Anchorage streets, Timothy finds the miracle of God’s mercy behind prison bars. Read “Trickster’s Roost”.

Air Force NCO, Roy O, solves critical technical problems aboard the world’s most sophisticated aircraft, but Roy’s obsessions set him on a flight path to pornography addiction, perversion, and finally incarceration. In prison, Roy’s plunge into shame is halted and reversed when he commits his life to Christ. Now he speaks openly about his “Flight from Perversion” to help others – inside and outside of prison walls.

“I bare an arm. I stroke the needle marks.” Heroin owns Mike Ensch, a cunning and ruthless drug dealer. When Mike deals to an undercover agent he lands in jail, facing a five-year prison term for sales and trafficking of narcotics. A judge offers him a single chance to change his destiny, and through Teen Challenge, he finds a resolute, loving wife who mentors and believes in him. His close call with prison and his miraculous healing from heroin addiction energizes Mike with a God-given purpose: to help incarcerated men and women meet Jesus Christ. Mike has traveled the “Broken Road: Addiction and Redemption.” As Administrator of Chaplaincy for the Alaska Department of Corrections, Mike Ensch is the founder of a new Christ-centered prison community called Transformational Living Community (TLC) that is rocking the Alaska penal system.

In this wonderful book of seven true stories, produced for the Alaska Department of Corrections, Chaplaincy,  I wrote “Broken Road: Addiction and Redemption,” “Trickster’s Roost,” and “Flight from Perversion.”  This book is published by Good Catch Publishing.