It is common to meet misfit lovers in the Far North, like Marthie and Nicholas. Alaskans often stoke up flames to warm a tent or cabin that most people presume will always be cold…

Gramma and Grampa always said that Mama left me here in Alaska because she was sick. I still don’t know if she’s even alive, but it doesn’t matter now, anyhow. I have Nicholas. He is kind, and he loves me, and I sure love him.

Living so far from town was hard sometimes; like, we didn’t get to walk in the malls, or eat at McDonald’s or go to movies much. But when we did go, it was like a vacation. Gramma and Grampa dressed up like two old-fashioned dolls and I wore my best dress that Gramma lengthened for me, and it made me feel pretty.

I combed and curled my hair in Gramma’s room with her, and she talked to me like she always did, in a quiet, stern voice.

“You’re a different kind of girl, Marthie. You’re special. You’ll be with us for a long time. We’ll always take care of you. Don’t talk to strangers. Okay?”

I remember how Gramma looked at me in the mirror like she had more to say – like she couldn’t bring herself to say more.

Grampa drove our old station wagon slow, like he had a wooden foot, and all the way to Wasilla he twisted the radio knob back and forth, trying to find a station that didn’t scratch. He never said much, but he loved me and I think he loved Gramma too. On our trips to Wasilla he made sure he bought us ice cream at the Safeway store.

Once every three months we made this trip and brought home our “supplies” as Grampa called them. He was a gold miner in Fairbanks before he settled at Hatcher Pass with Gramma, and he staked a couple gold claims along Willow Creek. That’s where I met Nicholas.

Grampa and me loved to go to the gold claim, and Gramma went along too, but she made sure that Grampa knew she wasn’t happy about it. Unloading the station wagon at the trailhead seemed like a signal for Gramma to start growling. She growled clear down the hill to the campsite clearing on the riverbank, and never stopped until Grampa lit the Yukon stove inside the wall tent and set up her tables and chairs.

I guess the cooking got her mind off the mosquitoes and rain. I thought it was cozy inside the tent, all snuggled in pokey wool blankets while I watched Gramma mix batter for pancakes, or open cans of beans, or fry fish. The same smells are in my tent now.

Grampa ran a motor-thing he called a gold dredge, and black smoke turned our white canvas wall tent a dark gray color over the summers. The dredge contraption looked like a giant vacuum cleaner that floated on inner tubes, and Grampa kept busy all day sucking up gravel with a hose. For hours he chipped and dug at rocky cracks in the creek bank until a hopper was full. Then, he’d kneel down like he was praying, and pan out the gold over a galvanized tub full of water. Sometimes he let me pan out the “material,” as he called it – but he said I didn’t do it right, and lost gold. Now I know that he just needed to teach me better, like Nicholas did.

Sometimes we would stay for a month before we went back home. Grampa was happier there by the river, I could tell. Gramma missed her real kitchen though, and she told him it was time to go when she would look at me and see a dirt tan on my neck and face. She said the water in the river was too cold to take a bath in, so she made him take us home, so we could clean up. Most of the time we left our camp set up all summer, and on the way home it was Gramma’s turn to be happy.

Nicholas came to our camp one summer, and it turned out that he had a gold claim not far from ours, up the canyon. He just walked in from the woods and asked Grampa for a can of lube. He said his dredge had run low on oil, and he didn’t want to go clear back to town for more. Gramma made me go inside the tent with her – she had a rifle for “bears and such,” and I figured he might be a “such,” so I sat quiet and listened.

Usually Grampa did not like strangers, but I could tell Grampa liked talking to Nicholas, who mined most of his 40 years around Hatcher Pass like Grampa did. Nicholas said he lived alone and wintered in Wasilla, about 60 miles away,when it was too cold to dig. They talked and talked, and Gramma was mad the rest of the day at Grampa. She whispered to him that Nicholas “looked” at me, but Grampa ignored her and told Gramma that Nicholas did pretty well for himself: He had a good dredge and nice Ford truck.

I saw him look at me too.

I used to walk along the crick to a beaver dam not far away from camp, and Gramma let me go alone because Grampa said it was okay. She still worried though. She would set an egg timer for ½ hour or 45 minutes, and I always made it back before it would ding, or she would turn the tent blue with words I tried to remember. It was at the beaver dam that I really got to know my Nicholas. 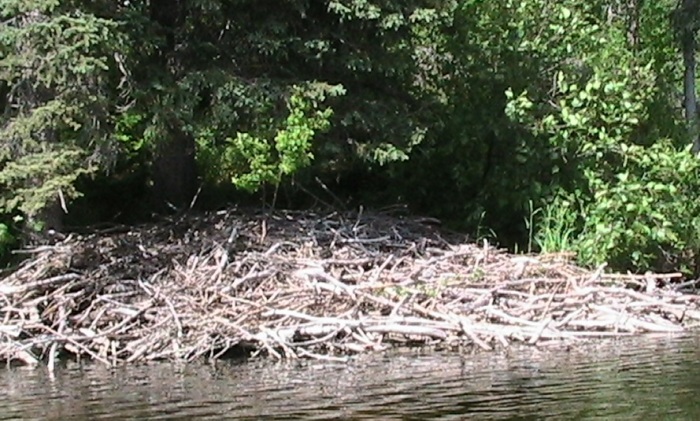 I named the beavers Dick and Jane. They worked hard on their house, cutting down birches and alders to add to their big nest above the water surface. It was funny, one day they didn’t seem to be around. Then I saw Nicholas sitting on the bank right across from me. I figured that he was watching the beavers too.

I didn’t run back to Gramma when he climbed atop the beaver lodge and balanced on a log to get to my side of the creek. I just sat, kind of curious. He asked if he could sit too, and I looked down and nodded my head.

I told him my name. I worried about my dirt tan. I worried about Gramma. But when Nicholas left, I wished he would have stayed. And I was late gitting back. Real late. Gramma looked at me kind of strange, when she asked why, and said that I looked flushed, and felt my head. I felt fine.

Next day I went early to see the beavers. And Nicholas was there, on my side of the river. He asked me about my family and how old I was, and why I wasn’t married. I told him all the things that Gramma told me about myself, about being “slow minded” and that men were trouble.

“Are you trouble, mister?” I asked him.

He laughed, kind of under his breath, “Could be.” Then he looked right into my eyes and said, “Marthie, call me Nicholas.”

He told me about hisself too. About his family who had lived in Alaska and moved away to the Lower 48. He was alone. His whole life he had mined and never fit with normal people.

He said he felt himself getting older and more lonely.

Like me, I thought, at least the lonely part.

Then in a gentle way, he asked me a question that made me really think.

“Do you ever need anyone more than your Gramma and Grampa?”

I looked at Nicholas, at his scraggly hair and whiskers and I said, “I do now.”

I kissed Nicholas that day, and he kissed me back. Then I left him sitting there on the log and went home to talk to Gramma and Grampa.

Gramma got mad, and sent Grampa to talk to “that so and so” and she gave him the gun to “make the point clear.” He was gone for quite a while. I listened for a shot and saw Gramma stop stirring a pot of stew to listen a few times too. Then we heard a commotion outside the tent, and we went outside to see.

Grampa was back, with Nicholas. They were talking like old friends and Gramma looked right into my eyes, deep, and I saw the same love for me that Nicholas had in his eyes.

It made me feel special. I smiled, and couldn’t stop. Gramma stomped back into the tent and closed up the tent flap. She knew.

I married Nicholas two months later. Gramma made sure he courted me proper, and she told him all about me, and he understood. He understood I was slow. He said he liked that about me. She said that I didn’t know about cooking and cleaning, and he said neither did he.

“I think I love the girl,” Nicholas said to Gramma, and she looked at Grampa like she was hugging him and said, “Well, that’s enough. That’s enough.”

Now the three of us mine for gold on Nicholas’s claim on Willow Creek. We share the camp work and I make Nicholas happy. I know I’m sure happy. He says we don’t really have to look for gold anymore. We have more than we’ll ever need, but the work is part of our lives now. And it will be part of little Nick’s life too.

Nicholas says it’s clean work. He says, it’s not clean like “clean or dirty,” but clean inside the brain. It makes you feel satisfied at the end, like finishing your ice cream, cone and all.

Now I stand at the table in my own wall tent and stoke the fire in my Yukon stove. I rock my baby in a cradle Nicholas made, and smell the fish, and pancakes. And sometimes I stop to listen to Grampa’s dredge roaring up the canyon, and I know Gramma stops to listen for ours running too.

We live in Wasilla in the winter when the snow is deep, and people at the Cottonwood Creek Mall stare at us sometimes. They stare at our boy because he is so cute. They stare at Nicholas, because he looks like a miner, and they stare at me too, because I have new dresses whenever I want. I wear a new one every time we go to town.

2 thoughts on “The Three of Us”