The Roman senate turned thumbs down on Nero’s egotistical request to demolish one-third of the city of Rome—but the great-grandson of Caesar Augustus wouldn’t take no for an answer. Nero wanted to build a series of palaces on sites of revered Roman monuments.

Not long after the political fracas, shops lining the chariot-racing venue, Circus Maximus, “happened to” catch fire. Roman historian Tacitus, who was a child at the time, wrote that gangs of thugs prevented city inhabitants from extinguishing the fire. Citizens were threatened with torture if they tried.

Flames spread wildly and consumed two-thirds of the city of Rome. Tacitus wrote that the fire burned for nearly 10 days, and Nero cast blame for the fire on “a class hated for their abominations,” (the Christians) upon whom he “inflicted the most exquisite tortures.”

“An immense multitude was convicted, not so much of the crime of firing the city, as of hatred against mankind,” Tacitus wrote.

“Nero Ego” infected the pagan population at large, and the Caesar glutted upon the human appetite for revenge. The loss of life, homes, and businesses inflamed bitterness and chaos, and ended in the slaughter of thousands.

Tacitus records how an offended society will tune-in to propaganda that agrees with their worldview and lifestyle. He writes: “Mockery of every sort was added to their [the Christians’] deaths. Covered with the skins of beasts, they were torn by dogs and perished, or were nailed to crosses, or were doomed to the flames and burnt, to serve as a nightly illumination, when daylight had expired. 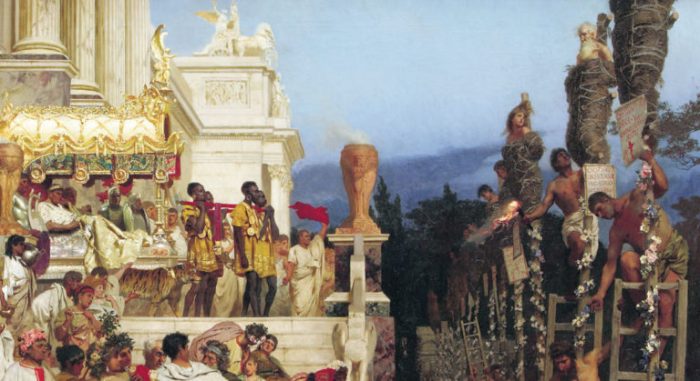 “Nero offered his gardens for the spectacle, and was exhibiting a show in the circus, while he mingled with the people in the dress of a charioteer or stood aloft on a car. Hence, even for criminals who deserved extreme and exemplary punishment, there arose a feeling of compassion; for it was not, as it seemed, for the public good, but to glut one man’s cruelty, that they were being destroyed.”

Nero may have been the main perpetrator of slaughter—but his gardens held hundreds of spectators. The Circus stadium seated multiple thousands more, and no one—senator or soldier—exhibited the moral courage to stop the carnage.

During Nero’s reign, Paul was beheaded in Rome, and the Apostle Peter and his wife were martyred there, too.

Political and military opponents rose up against 30-year-old Nero in 68 A.D., four years after the Great Fire of Rome. To escape the embarrassment of assassination he ordered a faithful subject to drive a knife through his throat. He affirmed his enduring “Nero Ego” with a final gurgling lament:

“What an artist dies in me…”

Though Nero disappeared, some believed him to be the Antichrist who never really died—and in a way they were right. His brand of insane evil flourished and reproduced through millennia.

Would I have been one of the human lanterns lit in Nero’s gardens? Would you? Presently we have no lens of personal experience with which to view such horrors—though we have the opaque lens of self-serving media.

Throughout history there has existed a single prototype who uses infamy or peace as stepping-stones to lead believers. As we trace his steps, he admonishes, “Whoever wants to be my disciple must deny themselves [say NO to temptations that lead us away from him] and take up their cross daily and follow me.” (Luke 9:23)

Where does Jesus lead us?

Into the arena. Even if we can’t imagine ourselves as eyewitnesses or martyrs in 64 A.D., we stand in the same spiritual arena as they.

Temptations can feel as subtle as maneuvering a chess piece. Other times, temptations scream in our faces, ugly and abhorrent. In the arena, we love rather than hate, we give rather than take, and we deny ourselves that temporary, arrogant Nero Ego moment. No matter how temptations manifest, we are Christ’s witnesses in 2020 A.D.

We share in a covenant of forgiveness ratified by Christ’s blood, and have encountered the same God who empowered martyrs to stand firm in their moment of decision. They knew that Christus (Latin for Christ, Anointed One) had risen. His Spirit lived in them.

In all of our moments of decision we cannot recant or waver to satisfy flesh or Antichrist, because the same Spirit of Christ lives in us, too.

“Therefore, since we are surrounded by such a great cloud of witnesses, let us throw off everything that hinders and the sin that so easily entangles. And let us run with perseverance the race marked out for us…” (Hebrews 12:1)

Watching the intruder.
"All done, Dad! It's below zero out here! Time to come in!"
Raven in the mist.